I started a collection called “Retro LGBTQ+“, which you can purchase merch and prints from in my shop.

The first design of the “collection” was created in december ’19 and was for asexuals.
It is scary to me how some people seem to still have such a hard time in dealing with someone in their surrounding being gray-, demi- or asexual or even accepting them.
Whatever the reason is, never let anyone tell you that you aren’t valid.
Your feelings are valid. Your experiences are valid. So are you.

Like many others it took me a long road to find out about asexuality. I was attracted to diverse people, not caring about their gender. I first thought I was bisexual, then discovered pansexuality which fitted more.
But never could anything describe how I really felt. Sure I was attracted to people regardless of their gender, simply not sexually, more like aesthetically and romantically.
Like many other though I wasn’t sure if I was “asexual enough”. Listening to a lot of asexuals and their stories, it took me until last year to understand that in fact I was “panromantic asexual”.
I don’t know where on the spectrum I am, but I don’t care. Just the fact to know that I am not alone and people out there understand, is relieving.
It was a long and hard road to go especially since asexuality is something that still isn’t talked about enough.
Many people grow up without knowing that it’s a sexual orientation like others or without knowing that it even exists.

As part of the LGBTQ+ Community I myself know that it is sometimes hard to find designs, be it on clothing or accessories, which show your pride in a more subtle way especially in everyday life.
We want to show our pride but it shouldn’t be a label that defines us, right?
That’s why I decided to start a whole “collection” around this topic, in which the designs have various pride flags in them but in more subtle way.

Again I don’t think that labels should define us, because you are more than that.
You are you.
But finding a definition of what describes your feelings, finding a definition that helps you understand yourself better and knowing that you are not alone is helpful and may take so much off of your shoulders. Because sometimes it doesn’t sound like it could be a big deal, but for some people it is something they really struggle with.
Everyone wants to know who they are, right?

This train of thought was the inspiration for “Retro LGBTQ”. I had shared my first designs on on my instagram account @yukiryuuzetsuart but decided to create, @retrolgbtq, an account that is only dedicated to designs for sexual orientations and gender identities.
The collection though borrows a little space from my regular shop where I upload artworks on various merchandise. Like this project? Check it out! 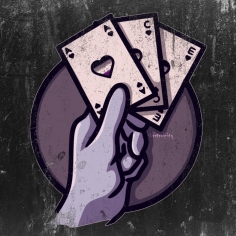